TEHRAN – With their breathtaking architecture, their splendid facades and their size, places of worship are often among the most beautiful buildings. However, there are a few celebrated for their bizarre location or great antiquity.

Qadamgah, which is at the center of this story, is a thousand-year-old underground temple transformed into a mosque centuries ago.

In fact, the creation of rock architecture across the Iranian plateau is influenced by the religious, geographical and political atmosphere of their time.

Such structures are mainly formed by the dominated empires of the time. Sometimes a place of worship continued to be served in later periods, but it was changed in its functions. Experts say one of the reasons that drew people to the mountains and rocky cliffs in different schools was the religious traditions of the community.

Qadamgah is said to be a place of worship where the ancient rituals of Mithraism were observed before the advent of Islam.

The place of worship, sometimes referred to as a cave, is located upstream from Qadamgah Cemetery near the village of Badamyar in the vicinity of Azarshahr in the Northwest Province of West Azerbaijan. It is located about 200 meters from a historic cemetery of the same name.

In addition to being called a temple, mosque or cave, the dwelling is of great importance in terms of architecture as well as cultural and anthropological values. It was registered in a list of natural cultural heritage of the country with the registry number 779 in the Iranian calendar year 1347 (1968).

Locally called the Azarshahr Mosque, the structure is also a travel destination, attracting thousands of visitors to the area every year.

According to the sanctity of mountains and rocks in ancient religions, especially in Mithraism, valuable temples and places of worship emerged in the mountains. Their obvious feature is circular domed spaces; the simplicity, the layout of the spaces and the way of creating the light which corresponds to the tradition of Mithraism in Iran.

Mehr temple in Maragheh, Dashkasan in Zanjan and Qadamgah temple in Azarshahr are the cave temples in northwestern Iran on which signs and symbols indicate the fulfillment of the duties of Mithraism in these temples. 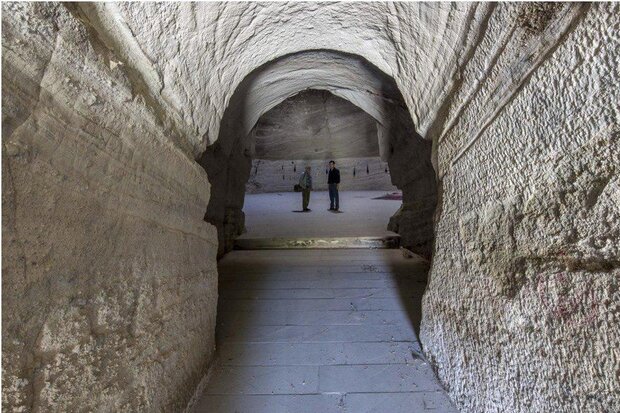 The exterior outlook of the Qadamgah Temple is very modest and at first glance may not even attract the attention of passers-by. This prospect is a small opening under a rock shelter.

Moreover, the main area of ​​Qadamgah is one of the coolest and most attractive spaces you can think of in an old building. This space which is drilled in the cave is a cone with a base diameter of 15 to 15.70 meters. The height of the cone is 12.30 meters and the diameter of the skylight is 105 cm. The walls were hewn evenly from the bottom to the top of the cone.

The main area of ​​the Qadamgah temple is one of the coolest and most attractive spaces one would usually expect from an ancient building.