Like certain places in the Kalamazoo district, natural places, cemeteries, etc., the Michigan Festival of Sacred Music’s Music in place project just existed quietly, waiting for people to find out what’s special about it.

At present, MFSM has its Connecting Chords music festival going full steam ahead, bringing a variety of live music to town from August through November.

But in 2020-21, the lingering pandemic kept live music from happening.

The non-profit group worked to keep musicians playing. “We thought it would be important to try to get money into the hands of musicians” who couldn’t earn their usual income from live performances, said chief executive Elizabeth Start.

They first launched the Resonance Projectengaging local composers and musicians to create new music inspired by artworks at the Kalamazoo Institute of Arts.

As COVID persisted, they wanted a follow up. “We thought it would be a great idea for people to celebrate Kalamazoo by writing about a place that’s close to their hearts,” Start said.

The composers/musicians were selected by “the board and our program committee, and we had taken suggestions from local musicians we knew, to find people we didn’t yet know so well”.

Music In Place went live in May 2021. Start says there has been no official rollout. Instead, the link was posted in programs and shared on social media. “It was kind of like, ‘oh, by the way, come see this.'”

Some pieces capture a moment in local history, like Helen Yee’s “Before the After.” Inspired by the Kalamazoo Farmers’ Market, it “was especially emotional because it was closed at the time,” says Start.

Others are persistent, relevant as long as Kalamazoo exists. The most notable that come to mind from Start are the “love song” about Megan Dooley’s Riverside Cemetery, “Riverside”, and two different pieces about the Stuart and Edison neighborhoods of Stratøs and Jordan Hamilton.

“People were obviously hanging on to something that meant something to them and finding a way to express it,” Start said.

Some places and sounds of Kalamazoo: 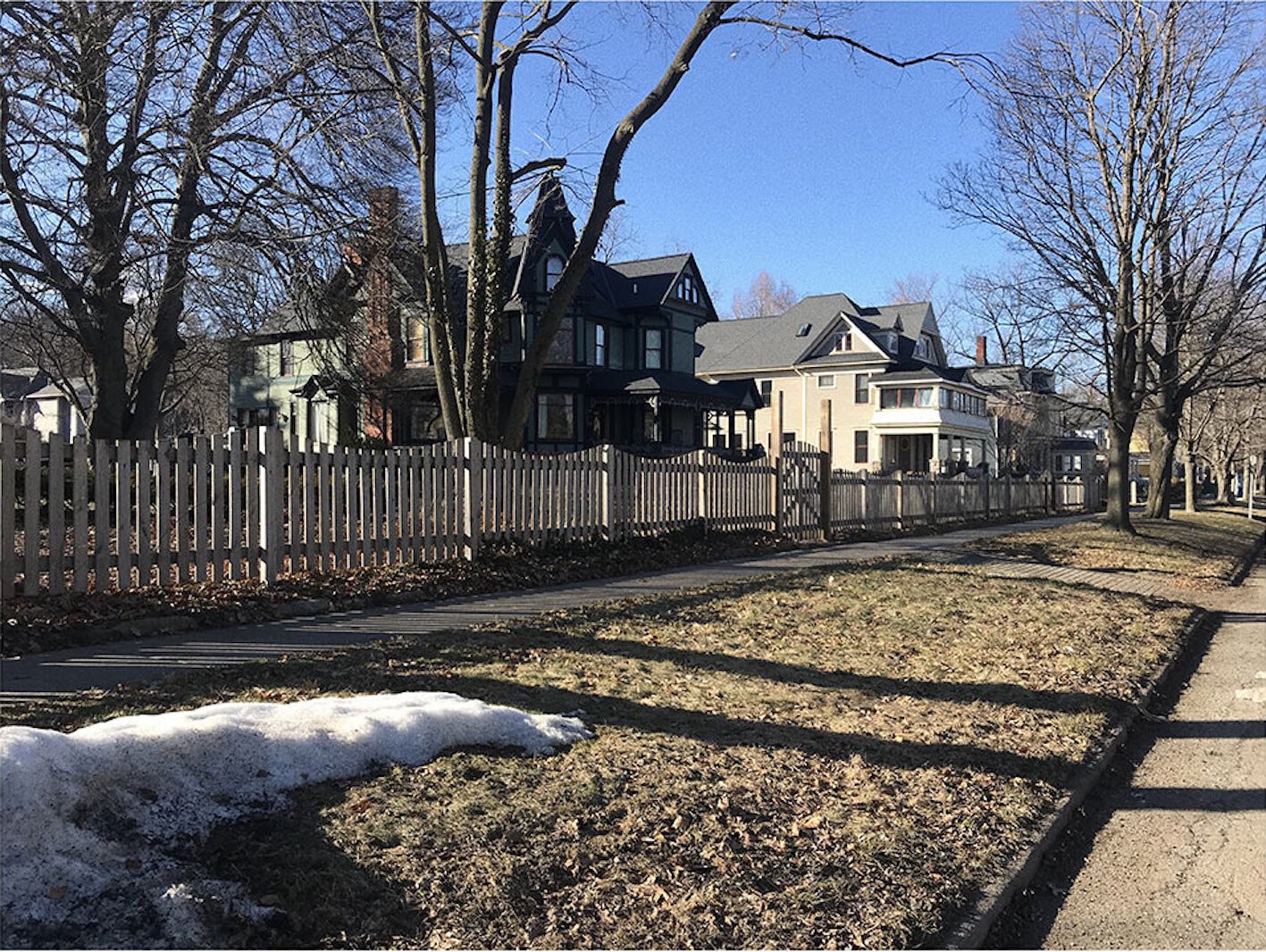 Stratøs turned a rainy day in the Stuart district into music.

Stratos moved to Los Angeles this summer, he says from his new home. Two things he knows he’ll miss now that he’s in the Dry West are the Stuart Neighborhood and rain showers.

Originally from Ann Arbor, he moved to Kalamazoo in 2014 to attend Western Michigan University. He got his undergraduate and master’s degrees, then spent another two years here “when COVID hit,” he said.

It was during confinement when he went for a walk in Stuart. A spray turned into a shower. “I was maybe under a tree or something, and the rain started to create this really cool rhythmic pattern…little melodic fragments start very slow and sparse, distant…faster and faster , closer.” 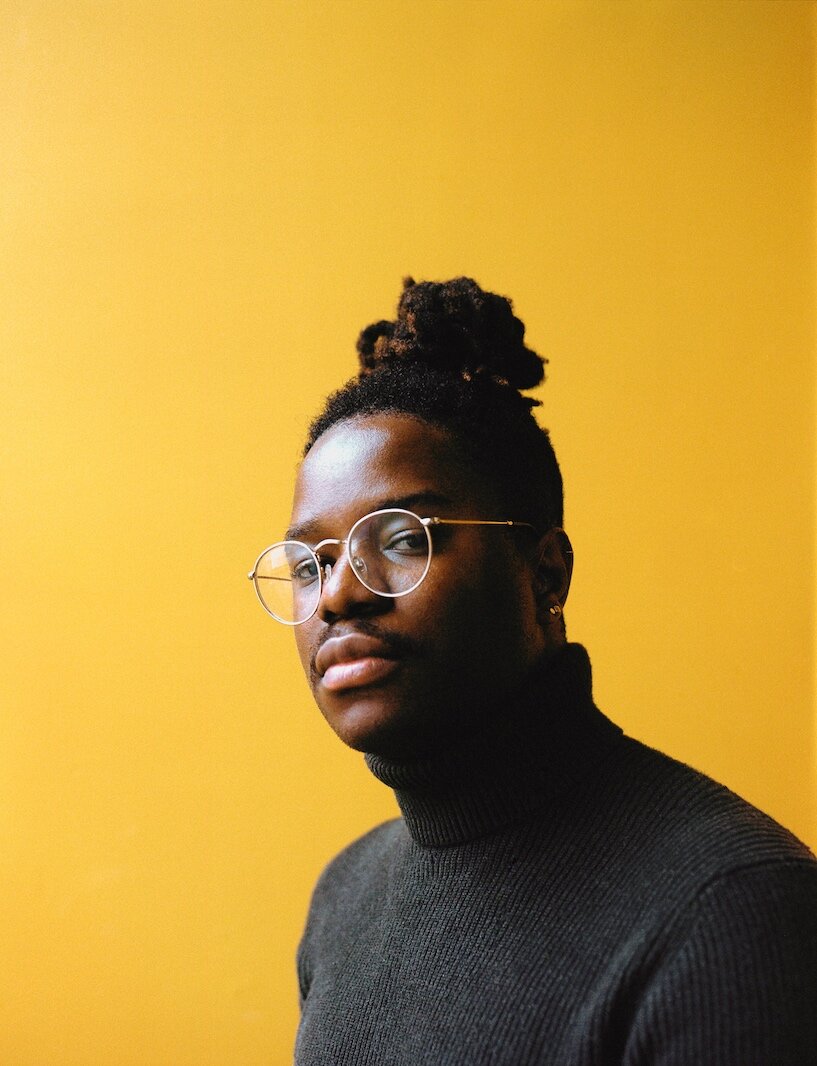 With life limited by COVID, it was one of those times of focusing on the world close to home. “I was at home, like everyone else, and I’ve created a lot in the Stuart Quarter. A lot of my recent work has been done there, so it has a special place in my heart,” says- he. 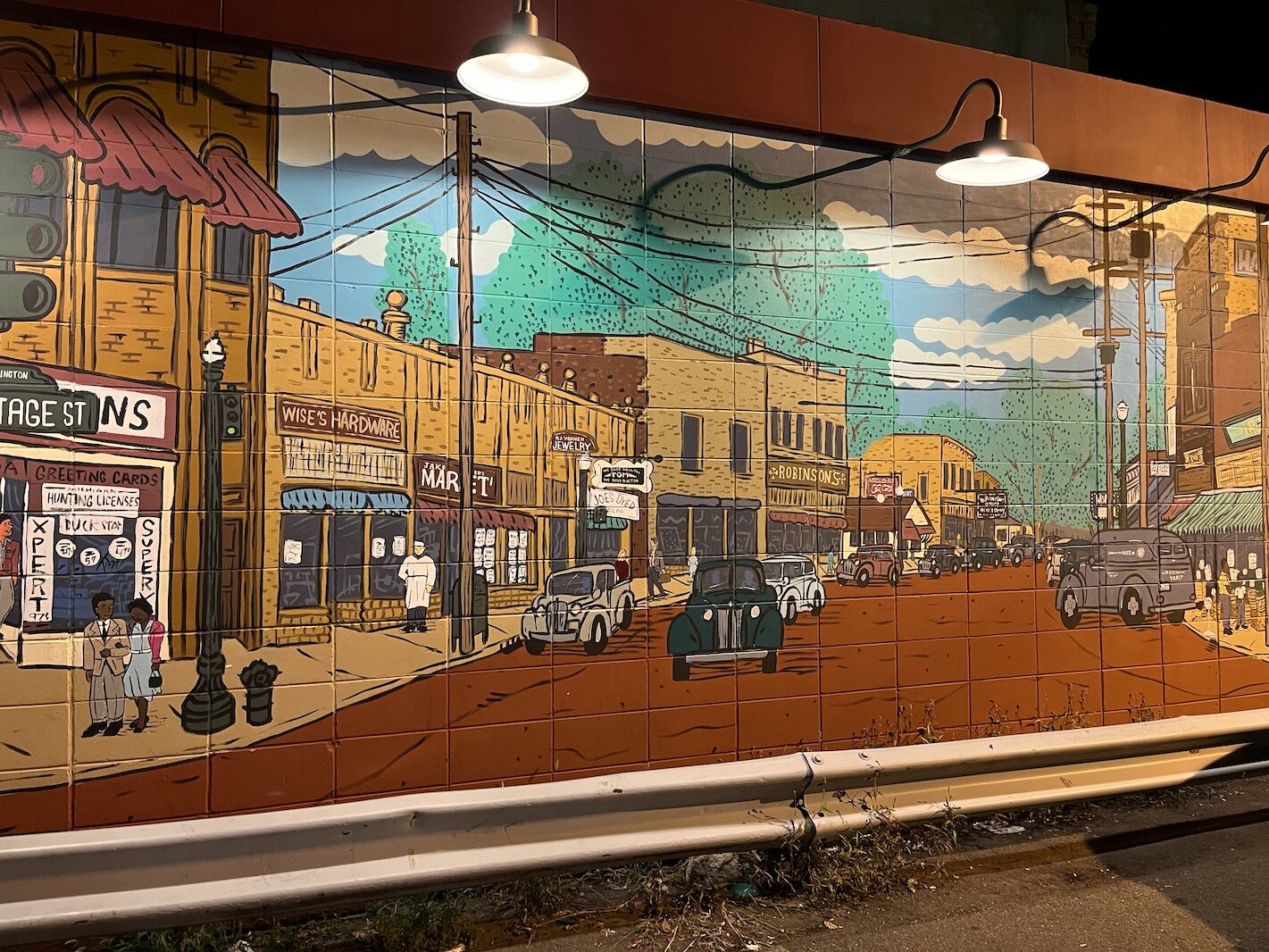 n Hamilton’s “Stockbridge” was inspired by his fears and hopes for a changing Edison neighborhood and Kalamazoo.

Jordan Hamilton’s piece was inspired by a mural on Howard’s Party Store in the Edison District.

He took a photo of it at night, lit by harsh lamps. The muralby Bonus Saves, shows Washington Square on Portage Street near Stockbridge Avenue in the 1940s, the road lined with vibrant life and businesses.

Hamilton wasn’t inspired to create a lively retro piece of the scene. There is a tension between the past in the mural and the present. His “Stockbridge” is slow, disturbing, surreal. Loops and samples, vocals and instruments that come and go, capture the “energy of change” surrounding the mural, according to his notes. “Stockbridge” was also co-arranged by drummer Terrance Smith and keyboardist Grayson Nye.

Kalamazoo is at a “turning point,” Hamilton says. But he doesn’t know if he should have hope or fear. 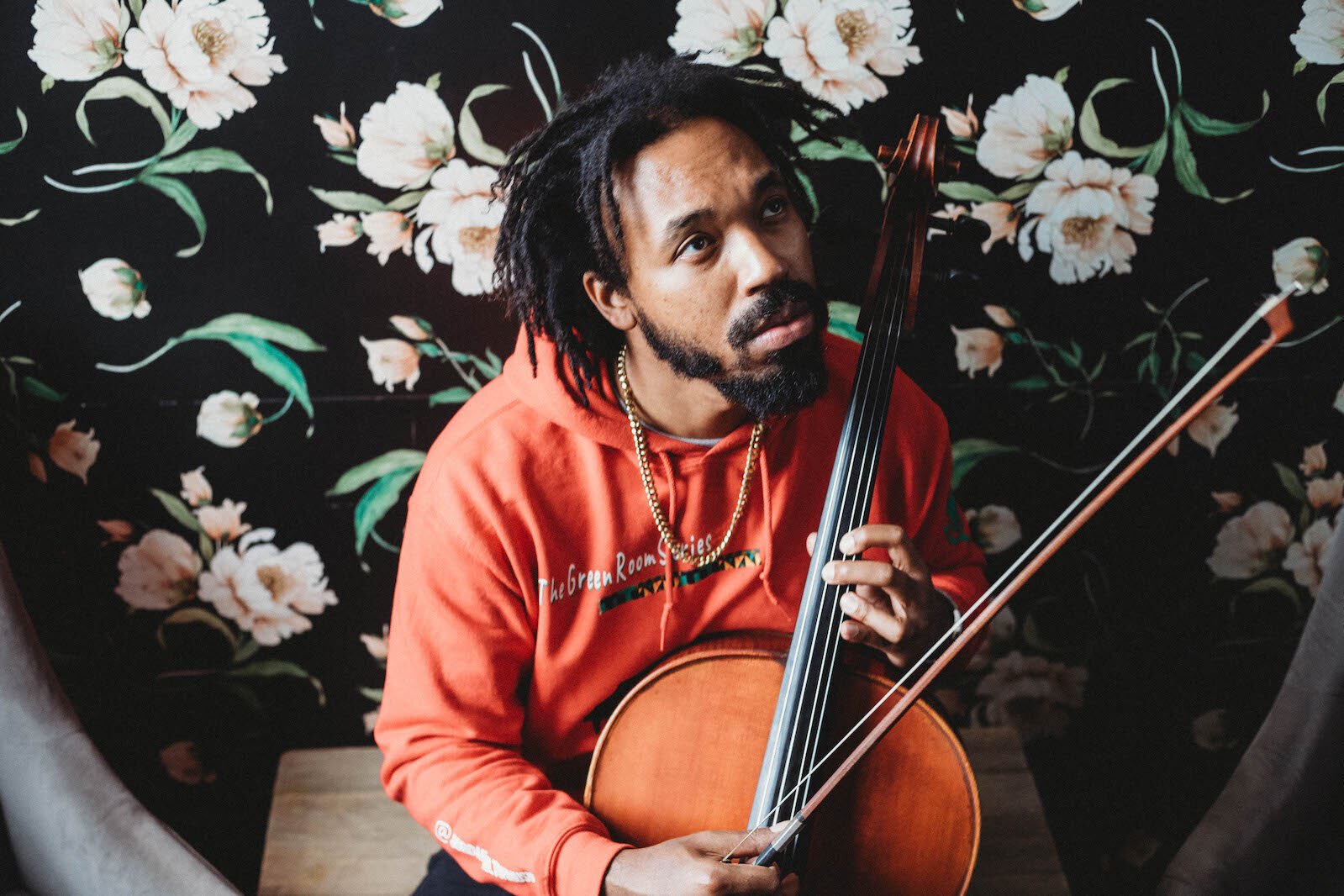 Cellist Jordan Hamilton’s “Stockbridge” was inspired by his fears and hopes of a changing Edison neighborhood and Kalamazoo.Washington Square is being revitalized — he points out there are new black-owned businesses there, but he’s also worried about gentrification.

If the neighborhood improves, housing costs could rise and people could be kicked out of their homes, he suspects. “They won’t have a choice. But does that mean you’re not trying to improve the area? Where’s the line?”

The mural, set in the past, reminds him of Kalamazoo’s history of segregation. “You can really see the lines,” he says. “At the same time, Bells Brewery is on the Northside, and they don’t have any customers from the Northside coming there. Mostly people from all over Portage coming from Pfizer or Stryker.”

He suspects the downtown improvements are “for all these young people they’re trying to attract to work for Pfizer or Stryker….. That’s what they do, that’s the business.”

“This (Edison) area is Kalamazoo,” Hamilton says. “The parts that make Kalamazoo are the most overlooked parts of the downtown community.” 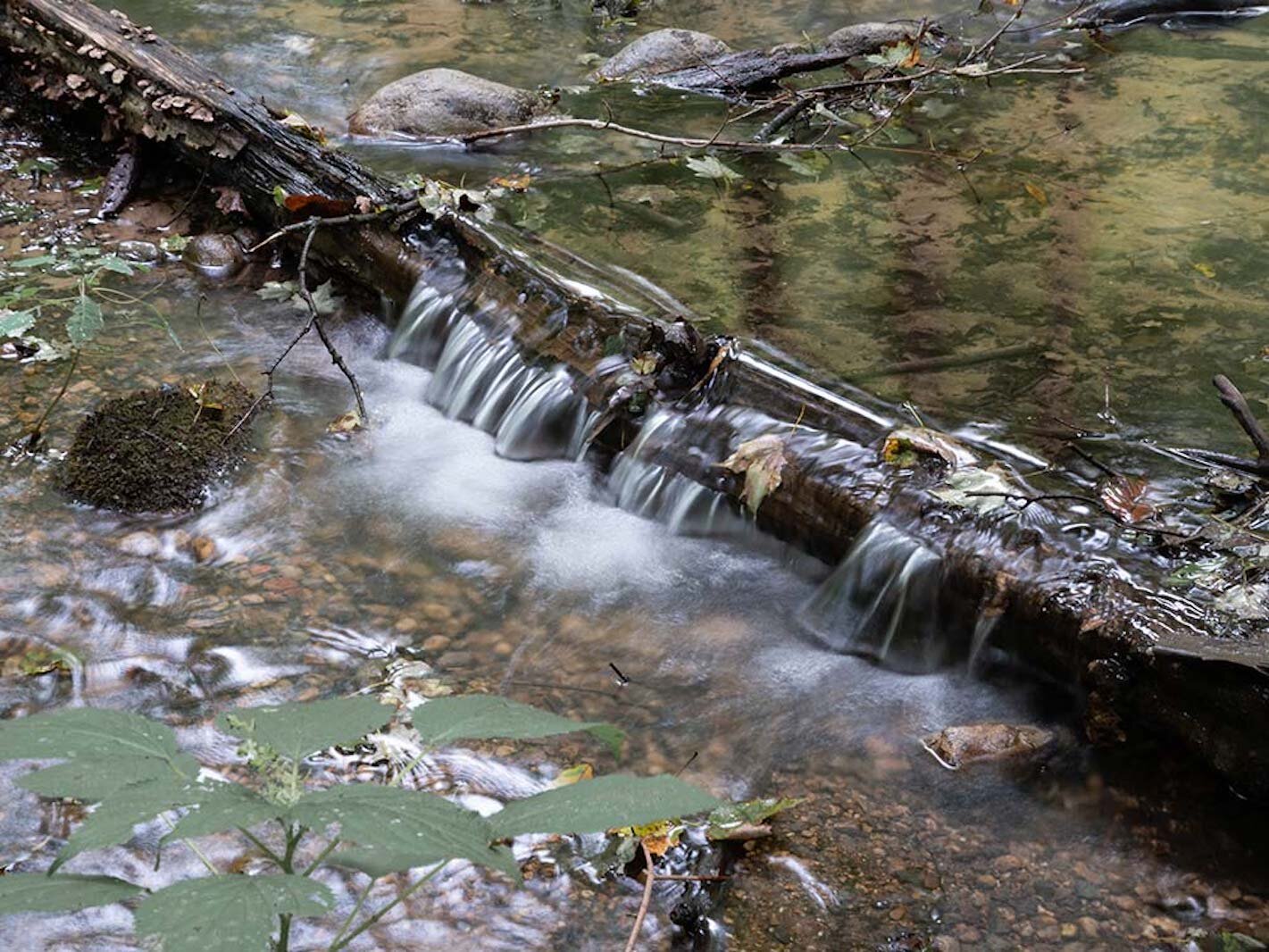 Saliba grew up in San Diego and recently moved. For him, “the abundant, free-flowing water in Michigan is a shocking thing to someone who grew up in a desert,” he wrote in his notes. 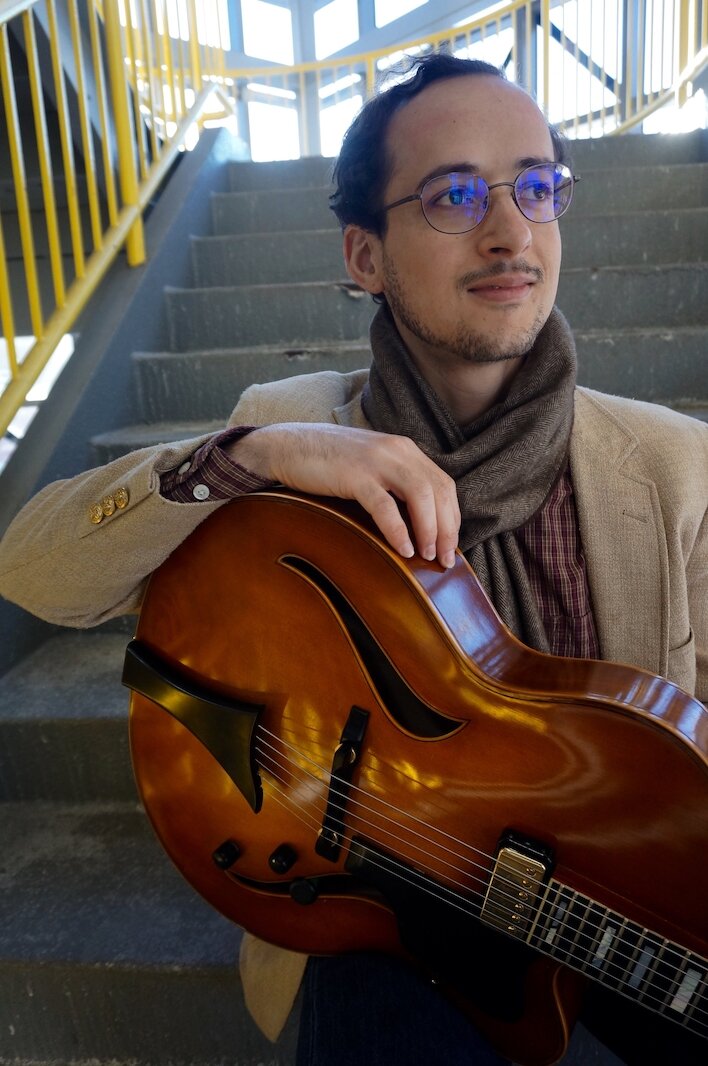 Andrew Saliba reproduced the sounds of the Kalamazoo River through jazz guitar.He says of San Diego, “The desert is beautiful too. But there’s something about the overwhelming vibrancy and lushness of a place that’s so rich in water. It’s beautiful.”

In choosing a location, he thought of a few personal places: Western Michigan University where he was a student, K College where he taught, and the La Luna recording studio where he spent a lot of time creating music.

During the pandemic he was hiking this section of trail along the river, enjoying the peace, the trees, the flowing water. “It’s about as good as it gets. It’s a gem of what I think Kalamazoo has to offer its community… The love of nature, the solitude, the natural environment in which to find,” he said.

With reverb and arpeggiation, he strove to recreate “the buzz” on the guitar. 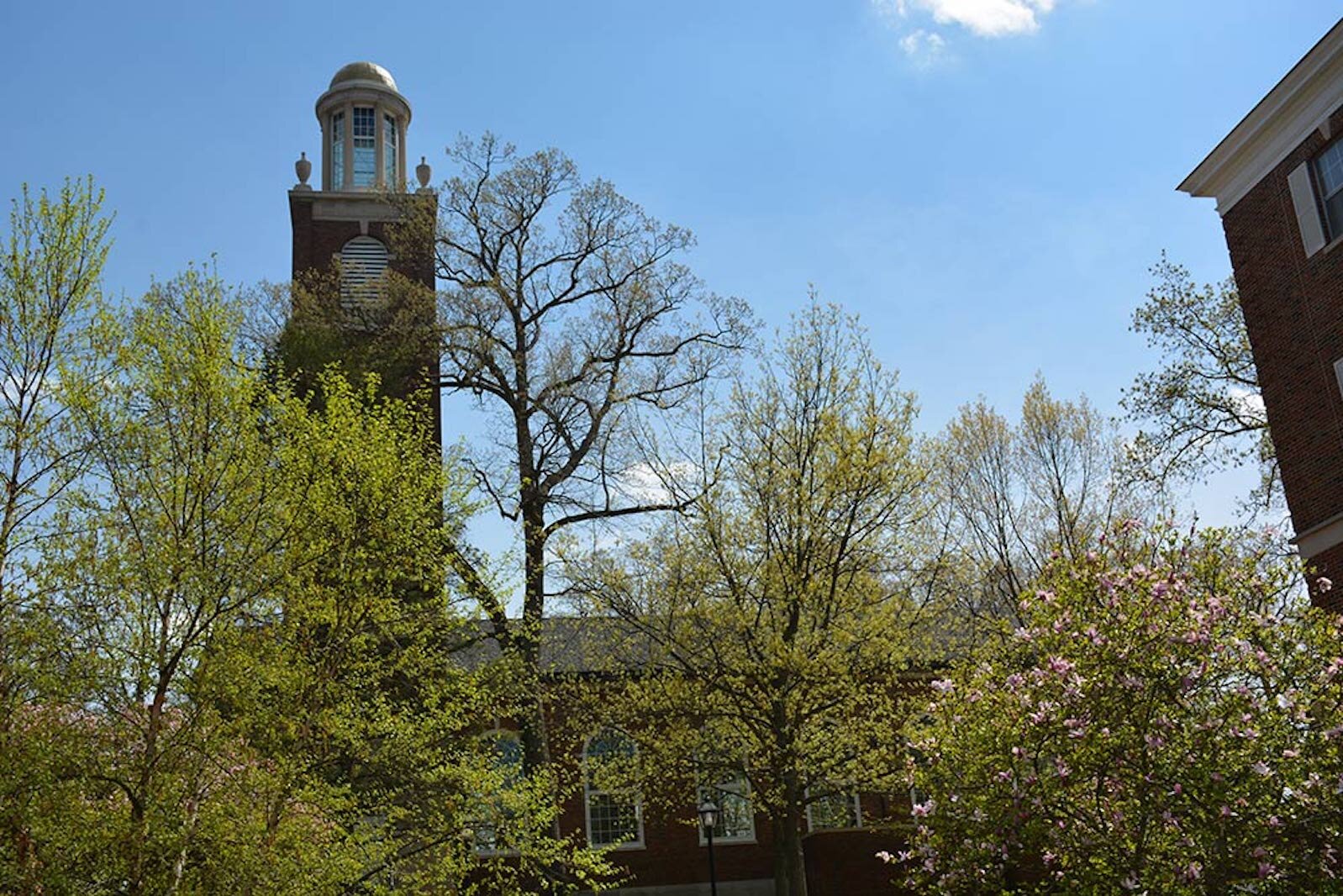 Elizabeth Start was inspired by Kalamazoo College where much of her musical career was fostered.
“Stetson Chapel Bells”

With Elizabeth Start on cello and Susan B. Anthony on soprano vocals, Start’s “Stetson Chapel Bells” sounds like it came from a sacred space, a personal sacred space for Start.

“I have so many memories attached to this place,” Start says. Much of her life as a musician took place in the chapel. She attended many weddings there. “A lot of people I’ve known had their memorial services there.”

When she started the “Music In Place” project, she didn’t think she was one of the musicians or composers. “The council voted to include me, without my knowledge.”

She was happy to look back on her life with Kalamazoo College for inspiration. “My dad taught at K College, I grew up three blocks away, ran around campus as a faculty kid back then. And my sister got married there. .I myself went to K College for a year.” 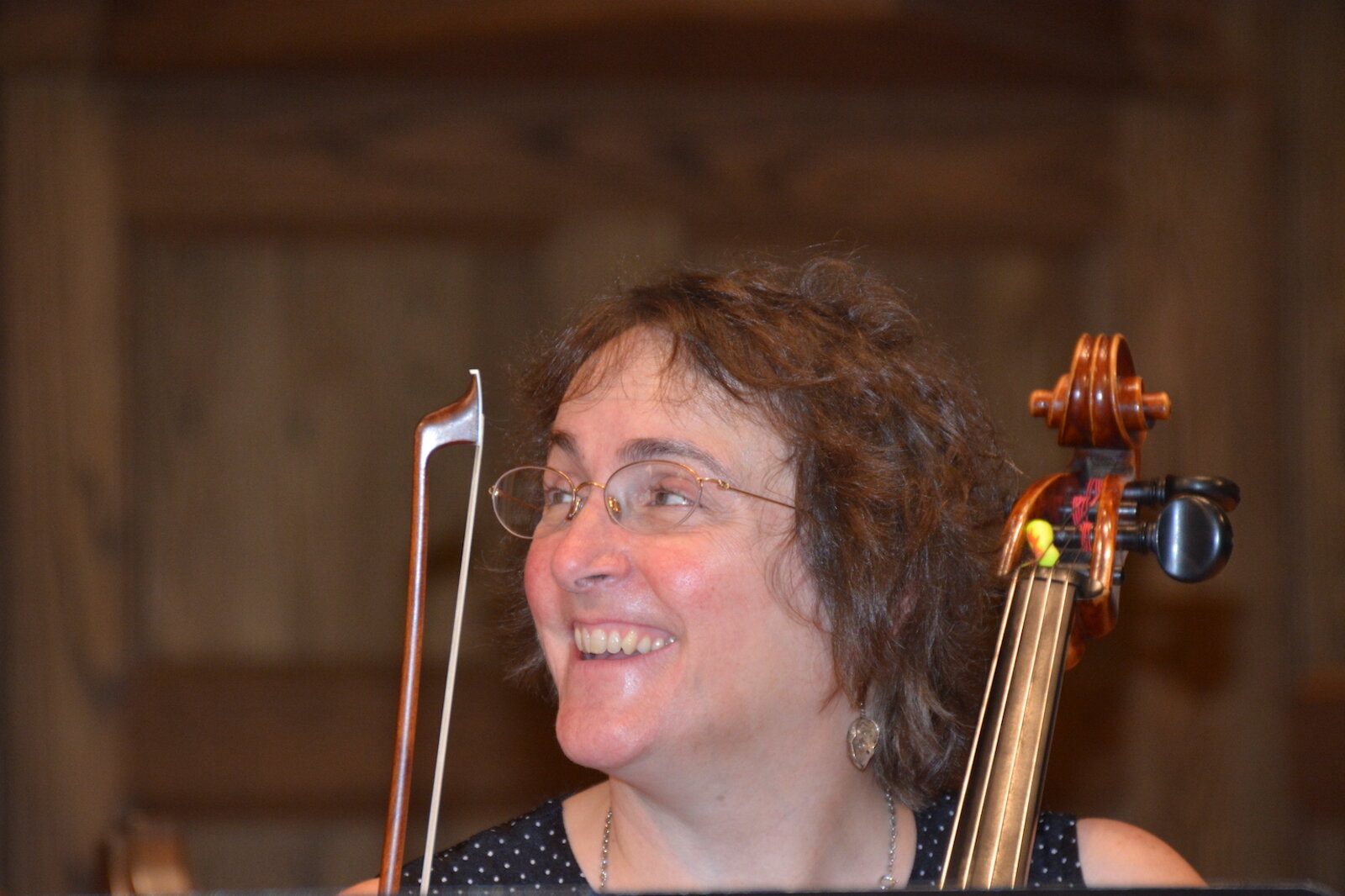 Elizabeth Start led the Music In Place project and also contributed with her composition inspired by the bells of the Stetson Chapel. In that first year, she majored in math and found herself in a math class that was ringing – the bell was ringing according to math rules – a class led by TJ “Jeff” Smith.

Leaving left to attend Oberlin where she studied music. When she returned seven years later, she discovered that Smith had led a successful campaign install change bells in the bell tower of the chapel.

She was disappointed to have missed the bell festivities. “I felt really left out,” she says.

Writing the play was a way of revisiting that moment she had missed.

For the text, “I just knew there had to be a poem somewhere,” Start says. She discovered a framed one on Smith’s wife’s wall, ‘For Jeff Smith, June 1984’ by Conrad Hilberry.”

“Hearing you talk about bells, we hear the bells talk,” Hilberry wrote.

Start remembers delivering newspapers as a child to Smith’s and Hilberry’s homes. The poem brought the sense of community into the play.

Start spends his time between Illinois and Kalamazoo. When she sees the tower and hears the bells, “That’s the thing that tells me I’m close to home.”

When Yee decided to do a piece at the Kalamazoo Farmers’ Market on Bank Street, she hoped to capture its liveliness as the center of the community.

But she went there in early 2021 and found it empty. A 2020 year of COVID protocols had slowed the liveliness that year, and then the market site was shut down in 2021 for its remake.

“Before the After” is tango-inspired, featuring Yee on violin, Ted Hogarth on baritone saxophone. Erin Malley and Doruk Golcu, tango dancers, are featured in a film Yee and Malley collaborated on. They dance slowly in a tango of connection and separation on stages of an empty market.

“There was this poignant thing where being together is taken away from you,” Yee says.

Both the play and the film capture a specific moment in recent history. “At that time, I was hoping for the aftermath, looking forward to what the new season at the farmers’ market would be like, and also life post-COVID.”

For Yee, the market has always been “kind of like a hub of Kalamazoo life, where you get all kinds of people,” she says. “It felt like a real center because anyone can go there… You always meet someone you know there and it ends up being social too.”

If she were to update the coin, now that the new market has come back to life, what would it look like?

She laughs. “I don’t think it would be a tango anymore.” It would be “a much more energetic and festive piece”.