A joint funeral was held for the two 16-year-old boys who tragically drowned in Derry this week.

The Common Requiem Mass was held at St Mary’s Church in Ardmore.

Pupils from St Columb’s College in Derry, which the boys attended, formed a guard of honor outside the church on Friday morning.

Mass was celebrated according to the rites of the Syro-Malabar Church.

Reverend Father Clement Padathiparambil, church leader in Ireland and chief celebrant of the funeral mass, told mourners that Reuvan and Joseph, who were from the Keralan Indian community of Derry, were “special in many ways “.

Hundreds of mourners filled St Mary’s while many more gathered outside the church to watch the service on the big screen.

During his homily, the parish priest, Father Michael Canny, said the boys had been taken from their families “suddenly and tragically”.

“In the eyes of this world, you, their families and this community have lost two young boys at a beautiful time in their lives when they were filled with hopes and dreams,” he said.

Both boys, he said, were keen on football and cricket and had “thriving in their upbringing”.

Their “kind and gentle nature has won them a lot of affection among staff and students alike”, he said.

Speaking on behalf of the Sebastian family, Abraham Sebastian said Joseph was a “wonderful, sweet child”.

He had grown into “a strong and steadfast teenager, a young man with so many plans for the future”, Mr Sebastian said.

Both families were in the midst of an unimaginable tragedy, he said.

Reuven’s cousin, Juliet, told the service that he was among the sweetest and kindest people she had ever known.

He spread positivity and “brightened up every room,” she said, and always wanted to make his family proud.

The Bishop of Derry, Donal McKeown, said Reuven and Joseph were “a huge gift to all of us in their lives”.

He added, “I know that the Syro-Malabar Church community is very strong and very united.

“They will work together to support those who are bereaved and traumatized over the coming difficult weeks and months.”

The boys were pupils at St Columb’s College and had received their GCSE results last week.

They were part of a group that decided to go swimming while cycling on Monday.

“This type of loss is so rare and so painful that our hearts go out to family, friends and the wider community who are suffering at this terrible time,” he said.

Finbar Madden, principal of St Columb’s College, said the boy’s death was “so difficult” for students and teachers to understand.

“Two fabulous young boys who today was to be their first day back at school, from year 13, but instead we are gathered here in Ardmore for their funeral.”

“I think you can see from the number of St Columb boys who turned out what these two young men meant to the school.

“These two boys were very special, they were friends in life and very good friends in death.” 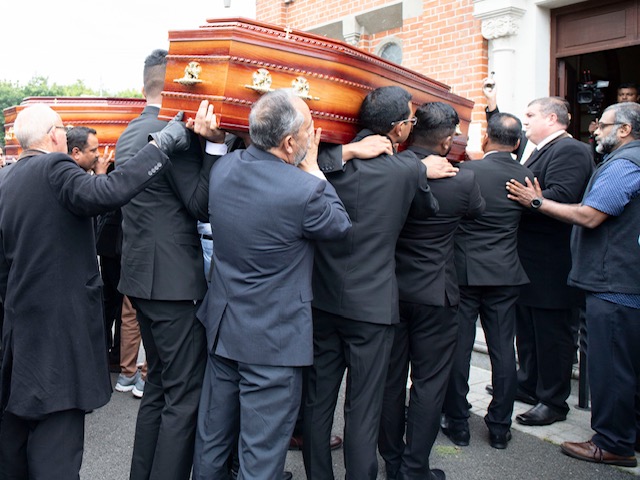 A book of condolences was opened to the public at the city’s Guildhall by Mayor Sandra Duffy on Wednesday afternoon and can also be signed online.

After the Requiem Mass, the remains of Reuven and Joseph were interred in the graveyard adjoining St Mary’s Church.

A candlelight vigil was held on Thursday evening at St Oliver Plunkett’s Church in Strathfoyle to pay tribute to the two boys, whose vigil was held at St Columb’s Church on the waterfront.